Tuesday, August 23, 2016 – The Consumer Financial Protection Bureau (CFPB) today, for the first time, acknowledged discrimination against an employee of the Bureau. The ruling by the Bureau’s Office of Civil Rights acknowledges discrimination in order to prevent the matter from going to a public EEOC proceeding.

Additionally, the Bureau violated Title VII of the Civil Rights Act of 1964 when it retaliated against the employee because the employee spoke out against discrimination.

The official notification form from the CFPB’s Office of Civil Rights is included below.

“This finding is a huge step forward in reforming the CFPB and holding them accountable for their actions. This shows they have no respect for their employees and confirms the dozens of reports of harassment, discrimination, and retaliation that we have received from current and former CFPB employees”, said Brian J. Wise, President of the US Consumer Coalition. “In order for the CFPB to accomplish its original mandate from the Dodd-Frank Act, and restore credibility to this agency, we must see a change in leadership, structure, and culture at the CFPB, not with the employees, but with the management.

“The CFPB has been accused of rampant discrimination both in Congressional hearings and in the public. One of the voices speaking out against the discrimination at the CFPB is the former President of the employee union at the CFPB, Rob Cauldwell. His congressional testimony in 2015 to educate Congress on the issues that exist at the CFPB was met with retaliation by Congressman Keith Ellison and Congresswoman Maxine Waters. They both retaliated against his claims of discrimination by publicly disclosing confidential and unsupported claims that were part of his employee record.

“I believe in the mission of the CFPB. I believe in what we were trying to do there. But as a disabled, gay, part Native American man, I quickly became one of the targets of the discrimination at the Bureau, and when employees that were part of our union came to me with stories of racism and bigotry, I knew they were telling the truth, because I had experienced them firsthand,” said Robert Cauldwell, former President of the National Treasury Employees Union at the CFPB. “The stress that the management at the Bureau has caused me has deteriorated my health considerably, and I vow to spend my final days standing up for the employees at this agency who are still subject to the hostile work environment that has been created there.”

The US Consumer Coalition (USCC) has led efforts to reform the CFPB through its Consumer Protection Initiative (CPI). Information on that initiative can be found at www.CFPBReform.org.

To schedule an interview with Brian J. Wise, President of the US Consumer Coalition or Robert Cauldwell, former President of the National Treasury Employees Union, please email Diego Sanchez. 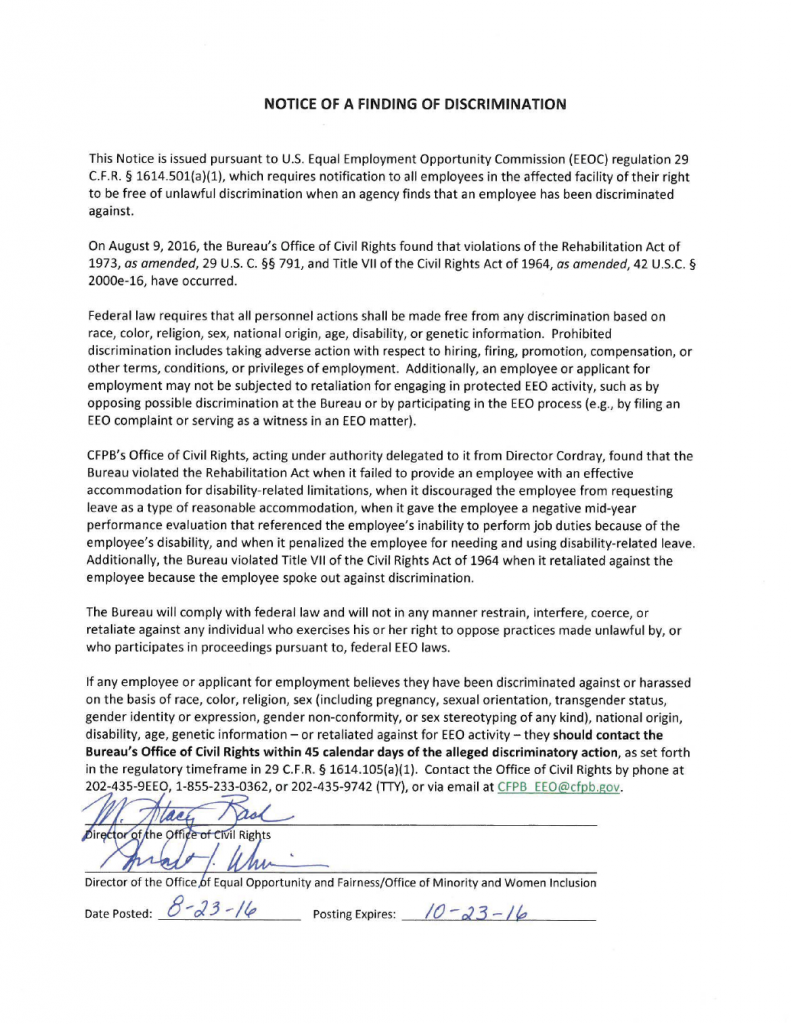